South of Charm with Elliot Grace 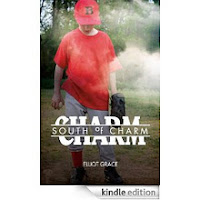 I'm absolutely thrilled today to be bringing you an interview with Elliot Grace of So close, but ... This is the fourth stop on Elliot's tour for his wonderful book South of Charm.

This is an excerpt, courtesy of Goodreads:

We're huddled in the far corner of my bedroom. Arms wrapped around our knees in the dark. The approaching footsteps grow louder. Ominous thuds. Our mother, but somehow not. She's standing outside my door. We listen to the creak of the hinges. My sister clenches my arm. "She's coming," she whispers. "She's broken."

You can buy the book from Amazon UK Kindle edition

Now let's see what Elliot has to say.

Describe South of Charm in your own words

While South of Charm doesn't really fit into the general selection of genres available, (something I'm actually proud to admit), I liken it to a coming of age story in the mold of King's Stand By Me, or McCammon's A Boy's Life. This is a story of small town innocence, of the drama surrounding a young boy and his sister, fallen victim to personal tragedy, and of a certain magic that only happens in neighborhoods where last names aren't necessary, and front doors are left unlocked after hours.

From starting to write, to getting published, how long did the process take?

I began South of Charm while laid off from my day job at that time, then continued on after being called back to work, for fear of losing the “groove” as my wife likes to call it. It took me three years to complete a manuscript worthy of speaking of. After signing with Wooster Books, revisions, rewrites, and final edits burned up another eighteen months, followed by six months of waiting. Needless to say, in this biz, patience is an absolute virtue.

Why was this the story you had to tell? It can't have been an easy one.

While I've played around with other story ideas, this was the one with the strongest character drama, the one I felt carried the best message of hope. This was the story that made my wife cry, which was most convincing of all.

Which character was the hardest to write?

Danny's mother proved the most difficult simply because her character demanded the most attention to detail. It took several re-rewrites to figure out her illness, her thought processes as her family crumbled around her. She's been the most challenging character I've dealt with to date.

Were there any favourite parts to write?

Growing up surrounded in athletic ventures, and now as a youth ball coach, penning the baseball scenes were a blast to write. I've since begun work on several new projects involving sports related themes, and enjoying every minute of it ;)

What, if any, advice would you give Danny?

What a great question! To be quite honest, following the end of Danny's struggles, and the respect demanded of him upon the final decision he makes, I think perhaps it would be me going to him for advice, as opposed to the other way around.

Being a regular reader to Elliot's blog, I expected this book to be well written and I expected it to tell a great story. I also expected it to be a cute MG book that would while away a few undemanding hours. You know what they say, two out of three ain't bad. This is not an easy book, but it is a rewarding one, and the characters will stay with you long after you've read the last page. I thoroughly recommend it. I also recommend this wonderful review from Anne Gallagher at Piedmont Writer.

Elliot's also holding a contest with some great prizes. Go here to find out how to enter and what you can win. The details are below his tour itinerary.

Thank you so much to Elliot for allowing me to share the fun of his book tour, and also for being my first ever guinea-pig interviewee.

Posted by Sarah Tokeley at 8:42 AM

Awesome People - If you can't see them, bash F5 a couple of times.

Blogging from A to Z April Challenge